They were nine maybe ten years old. He was an only child. He was loved by his hard working father and his mother. Although he did not have many friends he was well mannered and handsome. He respected others and did well in school. It was his birthday. He had a brand new shiny red bicycle. The day started out well, as many days did for him. Most ended well, this one would not. It was not going to be the best day of his life. 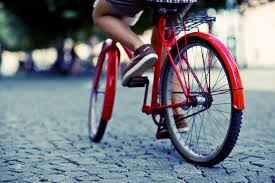 His friend, and he was his friend, came from the other end of the street. It was a nice neighborhood Most of the folks living there had some children. His friend’s family had four already. All boys. When someone said boys will be boys, they meant mischievous, challenging, competitive and occasionally down right mean. His friend was second oldest. That made him real close in age and in the same class at school. He didn’t have a bicycle or even a television set. Not everyone did back then.

It didn’t seem to matter much about who had and who did without. People just seemed to click together, or they didn’t. They did. They played ball together, threw rocks at the pigeons, rolled around on the grass hoping to end up on top. It was always short sleeve weather in Florida. They ate lunch at whichever house noontime brought them to. Their school was just a few blocks away. They walked to school together. That was probably the word which most often could describe them, together.

Later he didn’t know or at least didn’t remember, where the chain came from. It wasn’t much, just a three or four foot piece. Not terribly strong either, less the one inch links.

Perhaps it was much smaller. And maybe a little rusty, but maybe not. He was excited to share his new bicycle with his friend. He wasn’t trying to brag, just sharing. It was pretty and shiny and new. It was just the kind of thing you wanted other people to notice and something that brought a lot of joy.

It seems like meanness today. Maybe it was just quick response. Maybe, well maybe the emotion or the reason or the whatever just happened. His friend, and he was his friend, raked the chain across the front fender of the shiny new red bicycle. It suddenly wasn’t new anymore. It was no longer joy he was feeling. It wasn’t even a feeling he wanted to have. And a tear formed in the corner of his eye. His lip quivered as he thought about explaining to his parents that their sacrifice and cherished loving gift was not pristine. It was marred by the deliberate willful impulse of the one person he had called his friend.

He seemed to just explode. In a brief moment of jealous rage he had destroyed the joy and friendship because His friend had a gift he did not have. If there truly was a green eyed monster called envy, he had just allowed it to rise up and be his king. It wasn’t power or theft or greed or so many other things that it could have been. It was simply that he had a desire to someday be gifted and special and blessed and his dream was given to another. It was given to his friend. He felt it should have been his and if it would not be his then it could not be allowed to be as wonderful as what he hoped one day to know.

Evil always chooses that which opposes good. And even though he was not aware on that day, he choose to hate the God who created him. God could have made him smarter like his friend. He could have let him have fewer brothers or richer parents or nicer clothes. He could have but he didn’t. Why could he not have and be the best? Why could he not be on the throne of life? Why was someone else able to appear more blessed than he? Who did God think He was to allow his friend to have a shiny new red bicycle?

We are born with enough reasoning power to quickly assert our desires and manipulate our circumstances. Yet because it is fashioned by a twisted sense of right and wrong, we failed to see the good before us. The reasoning of doubt which Satan placed in Eve’s heart was the simple conjecture that God was selfish and wanted to deprive her. That was the emotion he felt that day. It is the emotion we feel each day when we have lust and envy in our hearts. It is a way of destruction to all who will choose it. It is the power which destroys friendships over a shiny red bicycle.

In examining the opening of the letter of Jude in the Bible, Matthew Henry commented hundreds of years ago the following wisdom. “Christians are called out of the world, from the evil spirit and temper of it; called above the world, to higher and better things, to heaven, things unseen and eternal; called from sin to Christ, from vanity to seriousness, from uncleanness to holiness; and this according to the Divine purpose and grace. If sanctified and glorified, all the honor and glory must be ascribed to God, and to him alone. As it is God who begins the work of grace in the souls of men, so it is he who carries it on, and perfects it. “

He was not a Christian. He did not know it was the rejection of that knowledge and the acceptance of the lie shared in the garden which ignited the hatred, scratched the bicycle and destroyed the friendship. It was his choice and it could not be undone. It was many years ago. It was a simpler time. What was done was simply wrong. It was frowned upon by all parents. They never played together again.

One day the owner of the shiny red bicycle rode it down the street to his former friend’s house. He told him they were moving away. He said he wanted to give his former friend something he could never give back. He said “I forgive you”. Then he rode away.

This entry was posted in Life and tagged Children, Life, sin. Bookmark the permalink.

This site uses Akismet to reduce spam. Learn how your comment data is processed.